Last October my eight year old son, who looks very much like the living, breathing embodiment of Harry Potter, announced that Halloween day at his school would be “Dress as your favorite book character day.” Great! I knew for a fact that we had the cape, the wand, the Hogwart’s tie….we were golden. It would be one less thing I’d have to worry about during a very busy time of year.

As it turned out, my son’s interest in dressing as Harry Potter was nonexistent. Instead, he wanted to dress as Coach Hedge from the Percy Jackson book series. Yes. Coach Hedge. The sarcastic, obnoxious, club carrying satyr who calls everyone Cupcake.

The whole experience caused me to look back on my own childhood memories of Halloween. Back to a time when things were a bit more simple and straightforward. To a time when you could buy your Halloween costume in a box.

Wonder Woman. Scooby Doo. Casper the Friendly Ghost. These icons play a staring role in my most vivid Halloween memories. As a child, nothing made me happier than when the shelves at department stores filled with boxes of brightly colored plastic costumes and paper masks. It’s weird to think that there are generations of people born after me that will never associate a Halloween costume with a box. 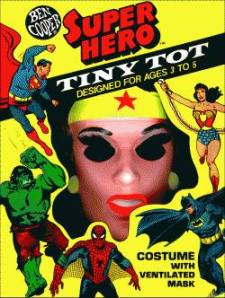 The clear plastic sheet in the center of the costume boxes allowed the characters inside to peer out (somewhat eerily now that I really think about it) at the faces of the young children eager to transform themselves. I can still smell the waxy, rubberized scent of the masks and costumes when I’d finally convince my mom to let me take them out of the box just ONCE before Halloween night. And sometimes, even now, in the wee small hours of the morning, I remember the melancholy and despair that swept through me when I’d be forced to puncture my beloved mask with a stapler because, just as my mom had vowed would happen, the elastic string designed to keep the mask in place did, in fact, snap when I insisted on playing with it just one more time.

It’s hard to believe that those truly were the good old days.

Please know that I’m certainly aware that the paper masks created a safety hazard because we couldn’t see that well through the almond sized eyeholes (not a swear word).

And yes, I’m shocked that we didn’t all burst into flames as we merrily glided and squeaked along the streets, encased in plastic, with our parents walking cheerfully in front or behind us smoking like chimneys as they “kept us safe” from the dangers of trick or treating. Believe me, the irony of that situation is not lost on me.

And alright, for crying out loud, I wasn’t always able to fully enjoy my loot by the time I returned home with a plastic pumpkin bursting with candy. Why? Because I was too lightheaded and just plain woozy from all the chemicals I’d been inhaling all night from my costume. It wasn’t just the eyeholes (why does that word make me giggle?) that were too small. You didn’t get a lot of fresh air in those getups, that’s for sure.

Looking back, it’s really a wonder that we’re alive.

But still…there’s just something about those days that I miss. You recognized the characters who walked by you on your quest for candy every October 31. Darth Vader. Popeye. Batman. We knew who those pop culture characters were and we adored them. We saw them on the big screen and in Saturday morning cartoons. They were fun. They were futuristic. They were hip.

Fast forward 30ish some odd years and all heck has broken loose.

Last week my son and I visited a popular Halloween store, and as we made our way to the children’s section, we passed a variety of Little Red Riding Hood, Snow White, and Dorothy costumes. Although they were all marketed toward young girls, each one would put the outfits displayed on the mannequins at the “Romantic Supermarts” to shame. I’m not proud of it, but as we continued walking, I found myself fighting the urge to imagine a scenario in which Mini Mouse might need to wear garters. It’s probably the second creepiest thought I’ve had in my whole life. The first being my puzzlement over one of those cakes that has a naked Barbie in the center. Once, at a birthday party, I watched a delighted little girl stare at her Barbie Princess cake as it was being carried to the table. Since it was the first time I’d ever really seen one (in the flesh, if you will), rather than joining in the singing, I found myself wondering how the cake would be cut. There clearly were not enough people in the room for the entire cake to be devoured, so the question became, would the cake be cut from the front resulting in the Barbie flashing the party goers OR, perhaps equally as disturbing, would that princess end up mooning us from behind?

I told you it was creepy.

In the end, all my worry was for naught. Within minutes of the candles being blown out, the grisly discovery was made that the Barbie was, in fact, legless. The revelation came as the blond beauty was recklessly yanked from the center of the cake by the four year old birthday girl who was intent on braiding Barbie’s hair. When all was said and done, poor Barbs ended up face first in a big blob of green frosting. The worst part about the whole scene was that, from beginning to end, it was alarmingly similar to the one and only segment I’ve ever seen of Girls Gone Wild.

Anyway…once we reached the section geared more toward eight year old boys, things didn’t improve. While there were a few familiar Mario costumes, a couple of Darth Vaders, and a few other recognizable characters, for the most part, that aisle left me feeling anxious. The long metal hooks displayed plastic bags filled with masks and costumes for characters that went by the titles Phat Pimp Child, Bleeding Chest Evil Pumpkin (what does that even mean?), Elf Warrior Child, Zombie Sock Monkey, Hipster Nerd, Hazmat Hazard, and Soul Taker.

It strikes me that very few of the costumes were pop culture icons and I’ve certainly never seen them on the big screen or on Saturday morning cartoons. It would seem we’ve traded paper masks and plastic costumes in the likeness of familiar, friendly characters, which admittedly posed both health and safety risks, for soul taking evil pumpkin heads (with bleeding chests no less) and every single kind of zombie known to man.

Please know that I’m not trying to be judgmental. I just find myself concerned that, at age 43, I’m turning into the proverbial “grumpy old man.” I mean, am I going to wake up tomorrow and scream at the neighborhood kids to, “Get off my lawn!”? I sure hope not.

Going to the Halloween store was certainly an eye opening experience for me this year. It made me realize that I should have been relieved that my son

wanted to dress up as a goat…man…thing. I don’t know whether to laugh or cry about the fact that I’m relieved that he’d rather be Coach Hedge instead of wearing a getup marketed under the name Bigger in Texas Flasher Costume. Yes, that’s the name of a real costume.  And no, I have absolutely no intention of finding out what that means.

My little guy wanted to be a sarcastic, obnoxious, club wielding goat man who calls everyone Cupcake, and that’s what I let him be. I guess it could have been worse.